Sea Moss, also known as Irish Moss, is a type of seaweed algae that grows in the shallow waters along the coasts of North America and Europe. It gets its name from its mossy appearance and ability to retain large amounts of water, making it an ideal ingredient for sea moss gel.

Sea moss gel is a natural, vegan source of vitamins and minerals. It has numerous benefits for the body including the skin. Making your own sea moss gel is easy and affordable, and it allows you to customize the ingredients to suit your needs.

In this article, we will show you how to make sea moss gel for an 8oz and 16oz jar.

If you’re wondering how much sea moss you need for a 16 oz jar, a good rule of thumb is to use 1/4 cup of dry sea Moss or 1/2 cup of fresh sea Moss per 16 oz jar. This should give you a good starting point for creating your desired sea moss gel recipe.

However, the amount you use will also depend on a few things. First, you have to consider the type of sea moss you’re using. Irish moss, for example, is typically sold in dried form, while Atlantic moss is usually sold fresh. This will affect the amount you need to use. Since dried sea moss will have to be rehydrated before making into gel.

Secondly, think about how you plan to use the sea Moss. If you’re simply making Sea Moss gel, then you won’t need as much as if you’re planning to add it to smoothies, soups or other recipes. That’s because some people prefer a thinner or running consistency as this makes it easy to work into recipes. So, keep this in mind.

Finally, consider the size of your jar. A 16 oz jar is a standard size, but if you’re using a 32 or 8 oz jar, or another type of container, the amount will vary.

Nonetheless, with all these factors in mind, it’s always standard practice to use 1/4 cup of raw, dried Sea Moss per 16 oz jar.

Making your own sea moss gel is easy and affordable, and it allows you to customize the ingredients to suit your needs. Here, we will show you how to make sea moss gel for an 8oz and 16oz jar.

Another cup spring or distilled water: This will help to rehydrate the sea moss, during the soak. Once rehydrated, strain and discard water (or keep for other purposes)

A 8oz or 16oz jar with lids: I prefer to use a glass jar because it is non-toxic and can be reused.

A strainer: This will be used to strain the sea moss gel.

A blender: This will be used to blend the sea moss gel.

How Long Does 16 oz of Sea Moss Last?

Assuming that you have a 16 ounce standard sized container of sea moss gel, it will last approximately 2-3 weeks in the fridge, if you take the recommended 2 tablespoon of sea moss gel per day.

So, generally, how long your 16 oz jar lasts depend on how often you use it and how much you use each time. If you find that you are using it more frequently, like more than 2 tablespoon daily, 2 times per day, then it may only last 1-2 weeks.

And if you use it sparingly, it could last up to a month. However, it is not advised to use sea moss that has lasted more than 2 to 3 weeks in the refrigerator. The best way to make sure your sea moss lasts as long as possible is to freeze it in ice cube trays and freeze it. Then, pop one or two each time you need it.

How Long Can You Keep Sea Moss in a Jar?

Sea moss is a nutritious and versatile ingredient that can be used in almost all sorts of recipes. But if you’re not used to always cooking with it, you might be wondering how long it is to keep it fresh. So, how long can you keep sea moss in a jar?

Sea moss gel in a jar will typically last 2 to 3 weeks fresh in the refrigerator. Make sure the har is tightly covered and it will last longer. However, anything beyond 3 weeks, and the nutrient quality of the gel begins to degrade. If you want longer storage, then freeze the sea moss gel.

This will help to keep the gel fresh for longer. So, if you’re looking to get the most out of your 16 oz container of sea moss gel, be sure to keep these storage tips in mind.

How Much Does 8 oz of Sea Moss Make?

Eight ounces of raw dried sea moss will yield about 4 cups of reconstituted sea moss gel. Keep in mind that the amount of water you use to reconstitute your sea moss may affect the final yield, so be sure to adjust accordingly.

Since one ounce (1 oz) of dried sea moss can make around half cup of sea moss gel. It is also important to note that the amount of gel to be made will vary depending on the recipe. As more water in a recipe will typically yield more amounts of gel.

Sea moss gel can be used in smoothies, soups, sauces, and even desserts. It’s a great way to add some extra nutrition to your meals without changing the flavor too much.

How Long Does 8 oz of Sea Moss Last?

If you have an 8 oz jar of sea moss gel, you may be wondering how long it will last you. After all, nobody wants to be stuck in the middle of a health kick with no sea moss left to eat.

Luckily, 8 ounces of dried sea moss will last 1 to 2 weeks in the fridge, assuming you eat 2 tablespoons from the jar daily.

Since 8 ounce Jar of gel is a good starting point for most people – especially if you’re new to incorporating sea moss into your diet, this gives you enough time to judge how well your body responds to it.

And you’ll also have plenty of time to experiment with new recipes and find ways to work this superfood into your daily routine. 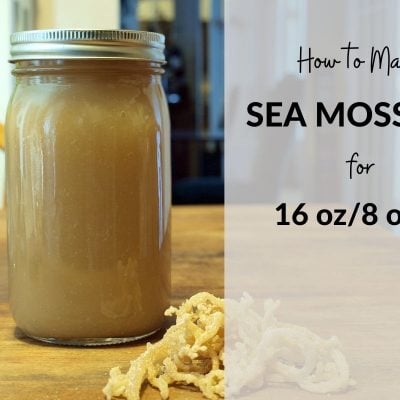 No ratings yet
Print Save Rate
Prep Time: 12 hours
Servings: 1

5 Things That Happen When You Take Too Much Sea Moss
Next Post:How Much Sea Moss to Take Daily? [Gel, Powder and Pills]